I am a graphics editor at The New York Times based in NYC. Previously, I was a visual journalist at The Economist and one of the co-founders of Politibot, a chatbot about Spanish and European politics. I also worked at Populate, a civic tech studio based in Madrid and at other newspapers in Spain.

Recently, I have spoken about Spanish geographic data, election graphics and tooltips. I also did a Reddit AMA some time ago.

A 3D tour of the Great Enclosure, an archaeological site part of the Great Zimbabwe, a lost African civilization. Read more about the process behind this graphic.

A tracker with a statistical model of excess deaths around the world. The model, calibrated with data from countries that publish death statistics, uses hundreds of variables to give a best prediction of excess deaths, which we estimate to be between two and four times the official figure. The model is public and the data updates every day.

For programmers, remote working is becoming the norm

I scraped +70,000 Hacker News job postings to analyse the rise of remote working in software engineering. Job postings that mentioned remote were on the rise before 2020 and have more than doubled since the start of the pandemic, while onsite positions have fell rapidly.

Are we going back to normal? This tracker aggregates data on transport, retail and entertainment from 50 countries to show how far we are from achieving the post-pandemic normality.

There have been 7m-13m excess deaths worldwide during the pandemic

With Sondre Solstad and Matt McLean

A new model shows that the global covid-19 toll has been between two and four times more than what official figures suggest.

Obtaining Spanish digital elevation models (DEMs) is a messy affair. The official website is slow, there’s multiple resolutions and it’s hard to keep track of the tiles you download. While making a map I started writing a script to download data in bulk, so along with a friend I decided to make this easier for everyone else as well. The code is on GitHub and it was inspired by other attempts.

An estimation of the risk of dying and being hospitalised from the coronavirus based on sex, age and underlying medical conditions. The model is based on millions of medical claims and was built in collaboration with medical and machine-learning researchers.

Tracking covid-19 across the world

With James Fransham and Rosamund Pearce

We calculated the centre of gravity of covid-19: an average latitude and longitude of the pandemic weighted by the number of deaths each week. The graphic shows how it moved across the world since February.

A tool for inspecting data quickly and playing with colorbrewer scales. You can divide the data by quantiles, equal breaks and ckmeans. Inspired by the QGIS histogram.

A map showing maritime traffic in European waters. I did the initial plotting in QGIS and colour correction and finishing in Photoshop. Data compiled by EMODnet.

Mapping the US 2020 election results using building footprint data and population density. I reprojected the data using Albers and then converted it to a tileset with Tippecanoe. The data was too big for my laptop to handle so I finished the process on a server.

Tracking the coronavirus across Europe

With Rosamund Pearce and James Fransham

A detailed view at covid-19 cases and deaths by region in Europe. We decided to show data for the last seven days to highlight new outbreaks.

I designed and programmed the map and the table, my colleague James Fransham collected the data and Rosamund Pearce plotted the small multiples.

A statistical model for predicting the US 2020 Presidential election, in collaboration with Andrew Gelman and Merlin Heidemanns from Columbia University.

I designed and programmed the main electoral college votes chart, implemented the state pages and did various bits of frontend work. We tried as hard as we could to give a clear explanation about the chance of winning. The model is open source on GitHub.

A better count of the casualties of the novel coronavirus can be achieved calculating a figure that we call “excess deaths”, a comparison between the total number of deaths, the expected amount of deaths in a certain period and the official covid-19 count.

This tracker aggregates excess deaths data for more than 20 countries around the world. I designed and programmed all the graphics and my colleague James Tozer compiled the data, which is open on GitHub. 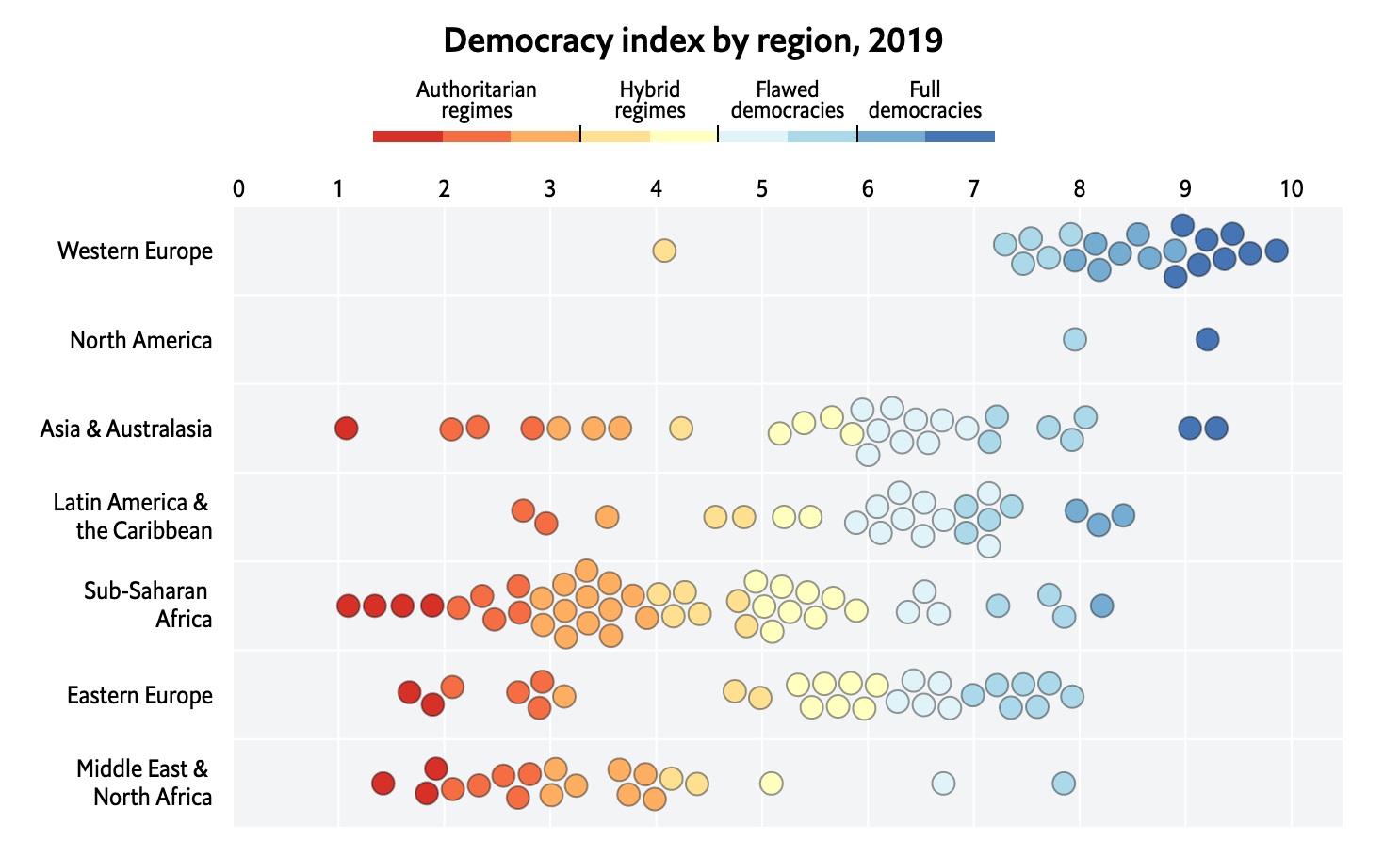 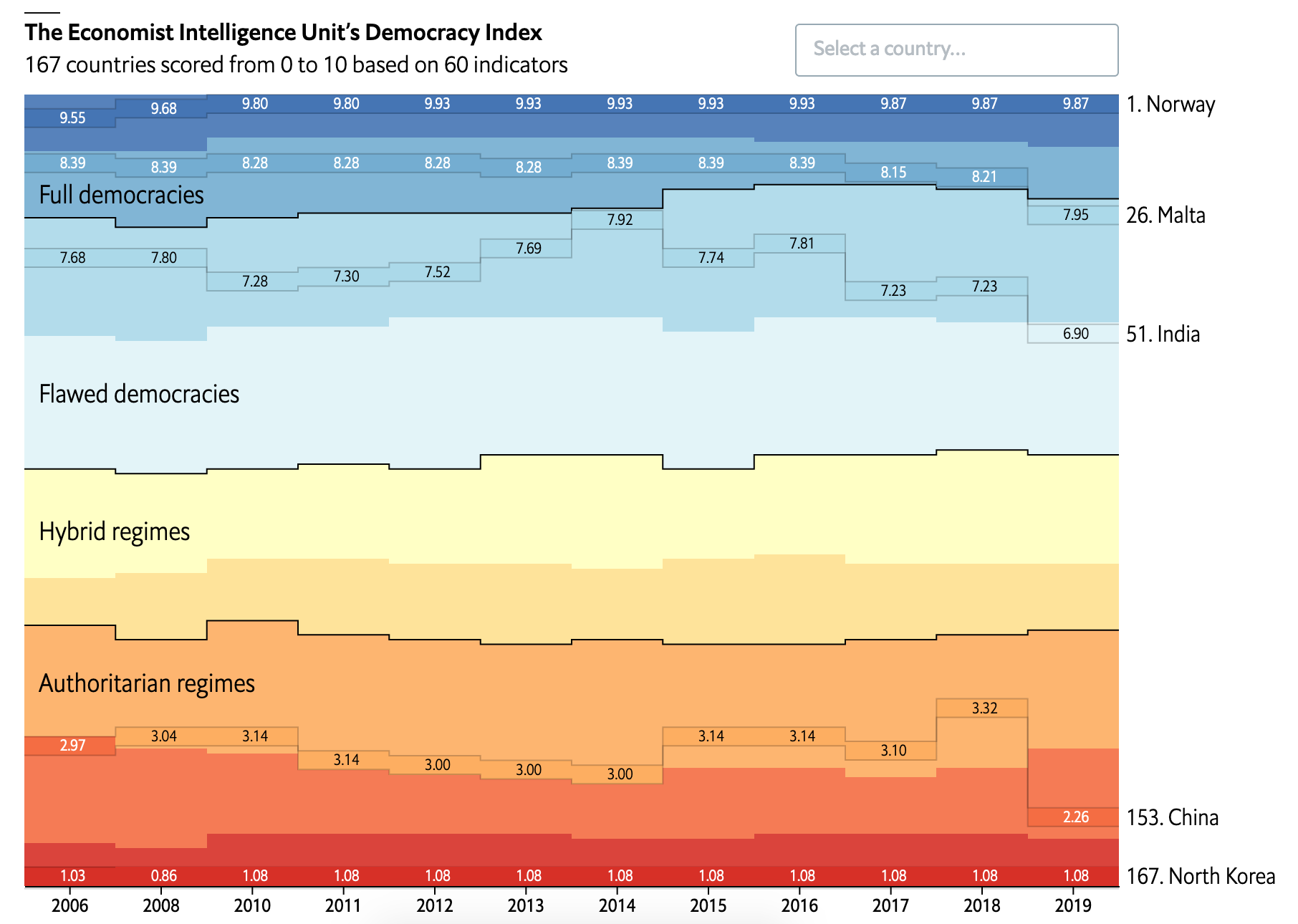 The Economist Intelligence Unit (EIU) produces an index ranking 167 democracies around the world each year. In 2019 global democracy retreated to its lowest score since records began in 2006.

The main chart (which I would call a linked bar chart) is a remake of the previous index with more annotation. I was still missing a broader sense of comparison so I ended up adding a beeswarm by world regions. All the charts were written with Svelte.

Our coverage of the UK general election was divided in two parts: a poll tracker and a result page. The poll tracker was published weeks before the election and the result page had an interactive map and a live forecast.

The result page lets you slice the constituencies by Brexit vote, age, race, density and income. This was inspired by a Times graphic from 2008. During the election night the live forecast predicted the seat count well in advance of the final result.

The 2020 Democratic primaries are the most crowded in decades. This poll tracker uses innovative statistical methods to asses the state of the race.

This website runs outside of the CMS. To fetch the text we use our own fork of ArchieML, with support for drop caps and small caps. We built the site using Next.js and AWS Lambda.

Allocate seats in the Spanish Congresss

With Héctor Meleiro and Eduardo Suárez

A simple model to make your own seat forecast for the 2019 Spanish election. You can change the percentage of vote for each party and see how the seats get allocated on each province.

There’s 350 seats in the Spanish Congress. Every province—there’s 52—has a minimum of two seats and the difference gets distributed by the number of inhabitants. Places like Madrid or Barcelona have more than 30 seats each, whereas small provinces like Soria only have the minimum. Yes, this runs D’Hondt on the browser.

We wanted to create a British version of the “Build an American voter” widget from the moment we published the piece.

To illustrate the divide between the support for a Brexit deal, remain and no deal we decided to use a ternary plot. James created a sample of 2,500 individual profiles of the electorate using microdata from YouGov, and I plotted them.

How to forecast an American’s vote

This little widget accompanied a piece about identity politics written by Dan. The idea was simple: choose a set of demographic traits and see the projected political orientation. At the beginning we wanted to do something bigger, there are some sketches where you could see every demographic combination in a tree layout. It was a bit messy and the deadline was getting closer so we simplified the concept as much as we could and put this together in two days.

Some reactions: “Impossible not to share”, “this explains all my online baiting”, “lunchtime distraction”, “owned”.

With Matt McLean and Evan Hensleigh

The Big Mac index is the classic guide for currency comparison. It has been running on the paper since the 80s and as an interactive since 2012. Our redesign made it responsive and more explanatory. We did a long write up on Source that goes into more detail, but this project took months from start to finish. We even launched a survey before starting the redesign and worked with UX designers from the group.

Dealing with currency was one of the hardest parts. The index includes 56, from the Euro to the Azerbaijani manat. For example, the exchange rate is usually calculated with a value of one to one ($1 to €1), but for the Japanese yen it has to be set to ¥100 to €1, as ¥1 would be a mere €0.01.

Who’s ahead in the mid-term race?

Forecast model of the 2018 mid-term election. After weeks of discussion we ended up with a design that prioritises straight chances —2 in 3 rather than 70%— and emphasises ranges.

We needed to update the article every day with new figures but the CMS didn’t really have a way to automate this. Evan wrote a Puppeteer script that generated the new HTML, navigated to the page, pasted the text in the content box and hit save (don’t do this).

Catalonia held a election in December 2017 after the dismissal of the regional government. Instead of plotting the results by party we decided to colour the charts by support for the independence.

We did a map scaled by population density and linked scatterplots with a couple of demographic variables: people who speak Catalan, Spanish born outside of Catalonia, foreigners, median age, higher education and income.